I am writing an update to my literature review, now that I have published v1 of The Little Book of Value. But this is the first literature review I am writing as an Open Researcher. So I am considering how do I write this as an open process. Some options:
Now I am thinking I will use a Google Doc, with sections:
So my research question is: what is new in value theory (2013 - 2018). Let's begin. Will update this post with my progress.

I posted a request to the Australia/NZ Open Research Slack channel (ANZORN) and had responses:
Will update here as progress continues. See the Google Doc for live updates.
Update 1 (24.1.19): Summary of Value Lit. published as an update in The Little Book of Value (version 3).

See also a network visualisation of Innovation and Value creation at kumu.io (opens full page), and embedded below. On a bigger screen you can choose between two views: - Innovation and value creation - thinkers (an overview of the literature review in my PhD 2012) - Value theory of innovation (the PhD model). NB: After clicking on a node, click top-right corner to close description.

Posted by Dr Richard Ferrers at 6:08 PM No comments:

Is there a business case for the National Broadband Network?

I made a model to calculate the value of NBN for the Business Case Inquiry, using an online calculator(JavaScript) called an Observable Notebook. 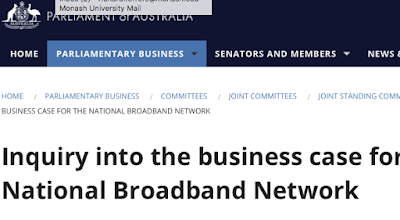 
I had a class in Feb at Melb Uni which showed these HTML sliders controlling the colour of a box; https://beta.observablehq.com/@maegul/basic-html-and-viewof-play and I thought it would be cool if you could make a model of NBN's finances and use a bunch of sliders to check out various scenarios eg

So I wondered with a bunch of sliders, say six, could you model 100M possible scenarios.

As I say in my submission:
This submission introduces an online model which describes financial scenarios of NBN’s business over the next 20 years; including replacing FTTN with FTTC/FTTP, repaying debt, upgrading to gigabit services and the potential fallout of not replacing FTTN, to calculate NBN’s financial value under these different possible futures. 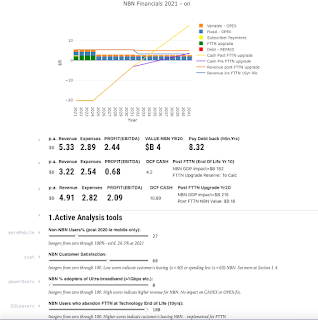 Here the Observable model is - NBN Financials from 2021 on. The model rates a Base Case value of NBN at $31B. https://beta.observablehq.com/@areff2000/nbn-financials-from-2021-on-v5a-verbose-off

I was so rushed getting it finished, and 5pp summary(see figshare link) for NBN inquiry, didn’t think to share here, at Whirlpool, for comment. I should have.

Here is the link to the version with explanations; https://beta.observablehq.com/@areff2000/nbn-financials-from-2021-v5-on

Key findings of the model

Disclaimer; model had no tax, interest, inflation, price rises, but was built in four weeks, so there you go. The next thing I would add would be interest on debt, and a slider for the rate, to add a time dimension/penalty to the replacement of FTTN.

Any comments, as usual, appreciated.
rf 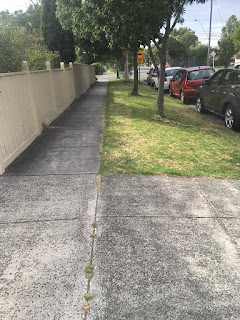 Walking to the train this morning, I noticed the long grass verge next to the footpath, as if for the first time. They are upgrading the train near my house, so for the last three months I have had to walk for ten minutes to the 2nd closest train station. It is summer here, and so I had my slip on shoes on to keep cool.

On a whim, I took my shoes off, and walked on the grass instead of the footpath. My 900m walking commute suddenly became a walk in the park. #shoesOff The footpath in bare feet seemed alien and unfriendly. The grass, while uneven and coarse, I realised was gently massaging my feet.

I realised how dull my feet felt in shoes on pavement. While barefoot on grass, I felt more alive, more in touch with nature, more normal.

Then a young woman, headphones on, frightened me as she scooted past on the footpath, walking briskly. Left Right Left Right, she was soon gone up the road, as I ambled along enjoying the tickle of the grass on my soles.

Monday, I will probably be scooting down the footpath, on a cooler day, socks and shoes on.

Value is thus an individual choice, in a perceived context, between value dimensions eg function vs pleasure, each according to their current momentary needs. That choice for me happened in an instant today, but not occurred to me over the previous three months.