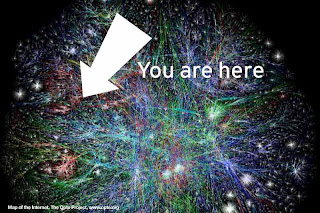 I reworked the figures (spreadsheet) in my costs benefit analysis spreadsheet with new assumptions. Four new scenarios show impact of changing assumptions. From low to high takeup adds $10 billion to NPV. But from low to high GDP impact adds $30 billion to NPV. More than 1% growth in GDP then NBN is a no brainer. Less than 0.5% then NBN is too expensive for the benefit it provides. Takeup has much less impact than GDP effect.

Therefore impact on GDP has the greater impact on NPV of NBN. From low to high takeup adds $10 billion to NPV. But from low to high GDP impact adds $30 billion to NPV. Sounds like we need to be arguing about how much impact the NBN will have on GDP. More than 1% growth in GDP then NBN is a no brainer. Less than 0.5% then NBN is too expensive for the benefit it provides. Takeup has much less impact than GDP effect.

Research on broadband impact on GDP.

1. Access Economics in their recent report for IBM, suggest 1.5% increase in GDP "within a few years" (p.37) for Transport, E-Health, Water, Electricity

However this is for FTTN (for $10-20 billion investment). Access Economics, The Economic Benefits of Intelligent Technologies, May 2009. Would be interesting to try to back out the costs. Though I don't think the 1.5% includes the cost of the network (p.ii), but depending on the degree of spare capacity in the economy (??jobs impact of building network??). 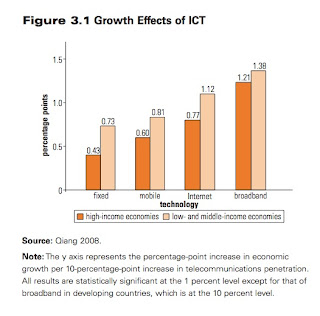 2. The World Bank considers there is a expectation of 1.2% increase in GDP for every 10% increase in broadband (Qiang 2009 pdf). This cites an earlier Qiang working paper of 2008. See picture above from Qiang 2009.

Australia in contrast has much high speed broadband. But many Australians do not use broadband. The ABS 8153.0 (June 2010) cites 9.6M internet services (3.2M over 8mbps; 8.2M over 500kbps). Of these 9.6M, 4.2M are DSL, 3.45M are wireless 0.8M dialup. Therefore there are at least 1.3M with dialup or slow broadband (less than 500kbps). These numbers relate to accounts rather than persons, so in our house one connection is used by me and my wife. Other houses may share a single connection with a family of five. Work and home connections might count twice. Still with 9M households and 2M businesses, there is still some scope for probably another 20% penetration of broadband from nothing, let alone those households with no computer. Malcolm Turnbull cited this week only 43% of homes with income $40,000 or less have internet.

Overall we have 9M households and 7.0M household broadband connections. But with only 4.3M DSL connections, there must be at least 2.7M wireless broadband connections, maybe iPhones and other 3G phones. At least 2M households don't have wireline broadband. Possibly as many as 4M households. Thus there is plenty of scope on the World Bank numbers for GDP growth in excess of 1%. However, the Cost benefit model needs a 1% GDP rise (about $7B per year) to run for about 8 years (from the end of the NBN build until the model ends at year 15).

The community needs to have a conversation about whether we think 1% growth in GDP is viable under the NBN. The NBN if spent in one year is about 3.5% of GDP. A 1% return increasing GDP is then around 30% return on investment. In these terms, the return seems quite high. Yet I am optimistic. Your comments are as always appreciated.
Posted by Dr Richard Ferrers at 10:51 PM 2 comments:

The Victorian Election is due on 27 November, and I just examined the Victoria Innovation policy (DIIRD). The focus is on businesses and innovation capability, roadmapping and foresighting (p.26), and establishing a new peak Innovation Advisory Forum (VIC DIIRD 2009-12 Corporate Plan). Innovation goals are about increasing innovation capability, such as increasing R&D to 29.3% of Australia's R&D (p.27). Focus is on the big job sectors: Auto, Aviation, Biotech, Energy, Financial Services, ICT, International Education, Tourism.

Value Management suggests a greater focus on consumers and consumer value. My suggestion on the ALP Victoria website Get Involved is a voter facing portal for Victoria Government, myVic. 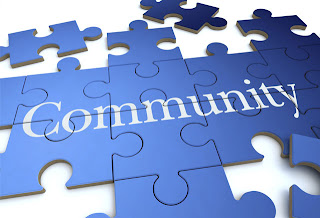 Many voters feel cut off from the Government and not listened to. We are separated often from our neighbours (See Softbank 30 year plan 10Mb pdf). Government is organised to suit their processes rather than voters' needs. Let's use the internet to make a better connection between voters and government.

Goal: every Victorian has a myVictoria webpage by 2013.
Estimated cost: $1 per Victorian operating costs, plus $0.50 per Victorian development.
Tagline: ALP: We Listen, We listen to Victoria

What does myVictoria do?
- share voter problems and likes, including strength (agree, strongly agree, disagree, strongly disagree)
- aggregate community concerns (a Victoria page shows all the problems and likes combined with number of voters, and strength rating on issue)
- share the good as well as the bad
- volunteering? Solve local problems. How can I help? Helping others in your local community (limited to 1-2km) by electoral roll
- car pooling. Get cars off our roads by finding nearby commuters who are going the same way.
- energising communities. Connecting Victoria.
- local problems, local solutions. Cutting costs. For instance, local volunteers to pick up rubbish off the street or beach. Local give advice to where problem can be directed in Government.
- reputation system, tracks volunteering, tracks politician performance (happy, not happy) for MPs, Premier, Govt Departments, Issues
- privacy. Only locals can see your (identified) issues, problems. Within 1-2km. Government and everybody can see aggregate issues (de-identified), by councillor, by electorate, by region, across State.
- donate. Benficiaries of volunteer work can donate to myVic website offsetting costs.

Benefits:
Labor is the party of Innovation. Labor: we listen. Labor: building communities. Like Facebook for Victoria (based on location you live and connecting with local community). Trending issues. Live real time ongoing feedback from voters. Not just at election. Not just a sample. Everyone has a voice. Cutting costs. Getting volunteer work recognised and organised. Intersects with NBN benefits, and focuses on enabling everyone to participate.

Fairly low cost at $1 per voter per year. Offset by across government contribution. Offset by donations from volunteering.

Risks:
World first, so may be privacy, regulatory and transparency issues. Cost a risk, but offset by pilot. Reputation at risk since project government sponsored. Technology risk if system goes offline.
Posted by Dr Richard Ferrers at 3:28 PM No comments: