The Little Book of Value 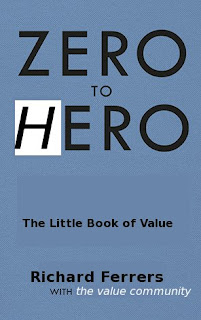 If you want to be part of the writing process, either:

- comment below with your email, and tell me "what do you value?", or
- make a three minute video and post the link below to the question "what does value mean to you"
- the writing process will be a public community exercise at Github.

By posting, you agree your content can be included (royalty free) in the above books. All included entries will earn the author, 10 copies of the book, so be sure to leave your email.

Add your comments to the wiki or fork the repository. Add your questions about value either in comments below or at Github.

You can see the outline at Github.

Happy New Rooster Year!!
Posted by Dr Richard Ferrers at 11:46 AM No comments:

On the eve of the 45th Presidency, it seems appropriate to reflect on the potential for innovation to create and/or destroy value. [1] 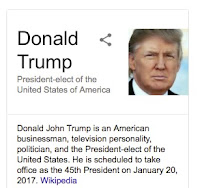 I have long argued here that innovation is doing new things that create value. But many new things destroy value. For instance, a tweet saying a President-Elect will cancel a $5B contract sends a company share price down as investors price that information into a stock.

It is harder to create value with new things. At ANDS, we work with Universities to promote the new idea of #openscience and data sharing as a value creator. The idea takes time, effort and investment to implement, which are costs. These costs have uncertain returns, so may create or destroy value. As Gilder suggests, the entrepreneur takes a leap into the future ("Faith of the Futurist", Wall Street Journal, 1999), reaching out to grab some uncertain future potential value.

Of course, Schumpeter talks of "creative destruction" (1942, Capitalism, Socialism and Democracy). So a new industry or product negatively affects what came before. Cars puts horses out of work, as did farm machinery. Agricultural labour fell from 70% of the population to low single digits (say 4-5%) as machinery and mechanisation raised the amount of work a farmer can do. The losses of jobs are destruction of value. The raised productivity of the remaining agricultural workers add value. Similarly, Rogers in Diffusion of Innovation (1962, 2004), quotes Machiavelli, saying (I paraphrase), a new idea has the lukewarm interest of those who may benefit and the criticism (resistance) of those who benefit under the old regime. Thus new things benefit and harm people. New things, new ideas, new products both create and destroy value. The value of those benefiting under the old regime is destroyed (transferred) to those benefitting under the new regime.

The trick for innovation is when there is more than a zero-sum game. When the benefits outweight the costs. Generally we can see this through GDP as those benefits and costs are turned into dollar equivalents. However, value is not measurable in dollars alone. Social, emotional and other types of value exist alongside economic value (see Value Dimensions). So people are concerned, worried, anxious about the new Presidency and his potential actions. Such emotions are temporary negative value, that may be converted into economic value, with consumer outlook an intermediate measure.

What comes to pass, we will have to wait and see. For me, I have set my expectations so low, that I may be pleasantly surprised when a new President does something half sensible. New perspectives bring opportunity for new ideas, new interpretations, new approaches. It remains to be seen whether these will create or destroy value. There is always another election in four years (let us hope).

There is always risk and uncertainty in new things. So let us not judge a person by their words, (which fade away like flowers, the wind, or a wave lapping on the beach). Let us judge a person by their deeds, that will last. Let us let our emotions assess ones words, and tell us whether to like, trust or resist their actions. I have noticed that new leaders arrive full of new ideas, but a real test is what can be put into action, as those ideas have to pass through the value filters of those affected both positively (the promoters) and negatively (the resistors) to those ideas.  This is the social process of creating and diffusing an innovation. A process whereby the value in the idea is assessed by all those affected by it.

[1] I believe we have no word for something new, destroying value (maybe 'denovation', Valman 2009).

Posted by Dr Richard Ferrers at 2:42 PM No comments: