Beyond a linear model of innovation 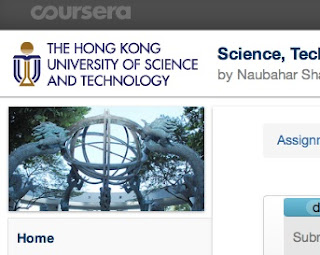 I am currently studying two courses on Coursera. One is about the micro - individual consumer decision making; Irrational Behaviour. The second looks at the macro - Innovation policy in China; Science, Technology and Society in China This weeks assignment asked students to postulate a better version of the linear model of innovation: 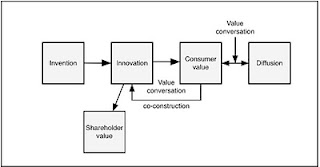 On reflection, I have updated my thinking to
propose a modified linear model, I recently tweeted: 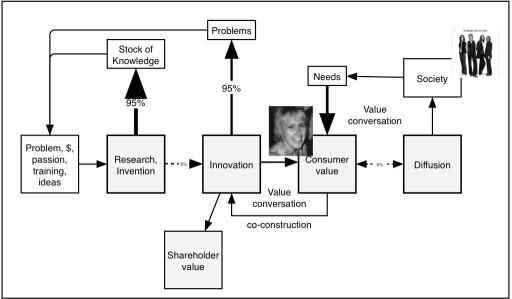 My alternative to the linear model
My model (pic.twitter.com/QuEySdFzkY) adds three new features to the linear model; which I summarise as research (new knowledge, basic and applied) -> innovation (new products, development and testing) -> diffusion (spread of products or commercialisation).


Conceptual Differences - how my model is different in theory
The linear model is a one way model, with no alternate paths, and no feedback loops. My model adds both feedback loops and new stocks of problems and knowledge which result from getting off the linear path, which can restart the research process. Research is both science creating new knowledge and practical problem solving in industry.

Operational Differences - how my model is different in practice
My model shows innovations can arise from consumer pull, from solving innovation problems, as well as from science push. This is consistent with von Hippels' finding in his book "Sources of Innovation" (1988) that much innovation comes from solving business problems, rather than from science.


Why my model is better - conceptually? My model is more realistic, while adding only a small amount of complexity. Feedback loops are importantly included, and explanations for what happens to the majority of non-commercial research and failed innovation which consumers have problems with.


Why my model is worse - conceptually? The linear model is a powerful story, simple and elegant, lean and mean. The linear model tells a positive story, while my model shows the larger negative side of innovation and non-commercial research. My model suggests investing in research is not assured of positive social outcomes, so is threatening to funders of research.


Why my model is better - operationally? My model shows a simplification of a complex reality. Not the most simple, but simple enough to tell a subtle and nuanced story about the challenges of research and innovation; that both risk creating no social benefit in the short term but improve our knowledge base and tell us what doesn't work.


Why my model is worse - operationally? For a non-academic audience, the simple story is probably best. Too much information confuses and hides the message. My model adds new boxes, feedback and new concepts; such as value, which are likely confusing to a lay or non-scholarly audience.

I commend this rework of the linear model of innovation for your consideration.
Posted by Dr Richard Ferrers at 3:57 AM 4 comments:

My thesis arrived on the library catalogue, password protected, so I made my thesis freely available to download on figShare:  http://dx.doi.org/10.6084/m9.figshare.680002 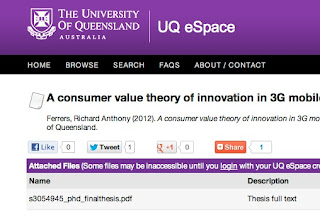 But I was disappointed to see that the pdf file was only available to UQ staff and students, though it was great to see 7 downloads before I even knew that the catalogue entry was online.... So I set it free (CC-BY) @figShare: Understanding what consumers value in 3G mobile phones... A consumer 'value' theory of innovation in 3G mobile phones: a grounded theory approach http://shar.es/JXAU6 via @figshare ... pdf to go..

One of the benefits of Figshare is:
- the allocation of a DOI : http://dx.doi.org/10.6084/m9.figshare.680002
A DOI is a permanent identifier and a custodian who promises to always make it available for the foreseeable future...
- a second benefit is that I put into action, with my own research, my work at ANDS to promote better research data management, sharing and reusing of data. In other words, I practice what I preach.
- a third benefit is I put a licence on my thesis: it is now released as CC-BY, which means I have shared the copyright with the world, so long as I am cited as the author, and the work is not commercialised.
Posted by Dr Richard Ferrers at 11:37 AM 6 comments: